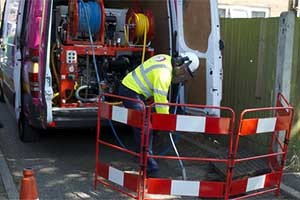 A team from the Lanes depot at Eastleigh in Hampshire has spent 10 months supporting a broadband company install the vital internet and telephony cabling in Dorset and Hampshire.

Working for Avonline Broadband, they used equipment designed for drainage pipes to clean more than 12 kilometres of cable ducting, then used a jetting hose to pull through a rope that was then used, in turn, to pull through fibre optic cable.

Avonline called in Lanes Group because sections of the data pipe they had been working on for BT Openreach had become particularly badly silted up during flooding over the last three years.

Jonn Cramman, Network Supervisor for Avonline Broadband, said: “Lanes Group did a very effective job for us. Where our cabling teams discovered a data pipe that was blocked with silt, we called in one of their teams.

“They used a jet vac tanker to desilt the pipe, and associated gully boxes. Then a rope was attached to the jetting head, and pushed or pulled through the pipe. This could then be used to pull through the fibre optic cable.

“This sort of cable pipe blocking is associated with silt and mud carried in surface water run-off, particularly in rural areas. Heavy rain and flooding in the last three years had exacerbated the problem.

“The silt reduces the capacity of the pipe and holds moisture which could be damaging the cabling assets. The Lanes Group personnel were excellent. I heard nothing but praise for the support they provided out field teams.”

The Lanes drainage engineers used a JHL CityFlex, a mini jet vac tanker ideal for the cable ducting work because of its ability to work in tight areas and take up less space when operated along narrower rural roads.

Many of the plastic pipes already contained cables which the Lanes team had to take care not to damage. A one-inch diameter jetting hose was used because some of the pipes were no more than 50mm in diameter.

Also, the jet vac tankers were fitted with a longer 200 metres hose, so rope lengths of at least 150 metres could be sent through each time.

Matt Griffith, Regional Manager for the Lanes Eastleigh depot said: “The success of this project demonstrates the broad range of skills our teams can draw to complete pipe cleaning and maintenance tasks.

“With weather becoming increasingly unpredictable and extreme, impacting further on digital cable networks, we see a growing demand for this sort of fast, safe and effective pipe cleansing and maintenance service.”