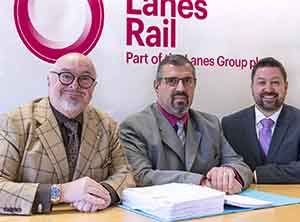 Lanes Group plc has won a contract to provide facilities maintenance services for the London Underground.

The five-year contract, with an option for a three-year extension, is the third maintenance contract awarded by Transport for London (TfL) to Lanes Group in four months.

The contract award is part of TfL’s new approach to facilities management. It is consolidating 50 contracts into just six, delivering £34 million in savings, while supporting the Mayor of London’s plans for improving transport.

The amount of assets Lanes Group is now responsible for maintaining has increased by 40 percent.

When combined with the two other contract wins, the additional work is expected to increase the annual turnover of Lanes Group’s rail division, Lanes Rail, by 30 percent.

“They also reflect the success of our strategy to grow the volume of business we do in the rail industry across all our operations. We are delighted to be part of TfL’s drive make its supply chain more efficient and cost-effective.

As a result of the TfL contract wins, Lanes Rail Commercial Director Matthew Todd is joining the main board of Lanes Group, while Senior Project Manager Huseyin Ibrahim is promoted to a new post, TfL Project Director.

Lanes Group Rail Director Bruce Crompton said: “We believe we have won these contracts because we have worked tirelessly to deliver excellent service and contract value for TfL.

“We have always had an open book policy towards managing cost, while setting high standards on quality, safety and service innovation that delivers results.

“Every single one of our people can be proud of what they continue to achieve on behalf of the travelling public who live in, work in and visit London.

“I am particularly pleased for Huseyin and Matthew. Huseyin is hugely respected within London Underground, and will now lead the team that will deliver these contracts for TfL.

“Matthew will be spearheading Lanes Group’s future in the rail industry, leading both the London Underground services delivered by Lanes Rail and UKDN Waterflow (LG).”

Lanes Rail has built up significant expertise in delivering targeted maintenance programmes based on its in-depth understanding of TfL’s rail assets.

This approach allows its teams to plan maintenance objectively, and focus it precisely where it’s needed, rather than carry out work according to an inflexible schedule.

This contract is due to go live in June.

Lanes Rail had previously won a drainage contract for the Sub-Surface Lines, and the Bakerloo, Central and Victoria Lines. It had also been re-awarded the contracts to maintain structure and drainage assets associated with the Jubilee, Northern, and Piccadilly lines.

Overcome network troubleshooting challenges in hospitals Why water deregulation has left some customers “high and dry” when...