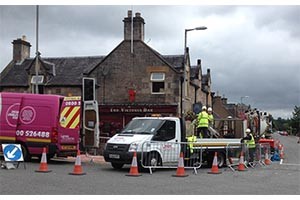 The work was carried out by the company’s Reline Division during the two-week annual shut-down at the CHP plant and distilleries in Rothes, Moray.

Jon Close, project manager for Lanes Group, said: “These were major works, and the most extensive programme of repairs to this very important pipe network for a number of years.

“Everything went very well, and the maintenance work was completed as planned, allowing full use of the pipe system to resume as soon as the shut-down period was completed.”

Lanes Group was commissioned by operations management provider RCL for the Combination of Rothes Distillers (CoRD), which runs the CHP plant on behalf of the distilleries.

RCL General Manager Andrew Wood said: “It was a well-planned and extremely professional installation by a knowledgeable team of operators, which not only reduced the project time, but also completed the works within the original budget. The Lanes teams did themselves and their company proud.”

A comprehensive survey of the network, carried out as part of ongoing maintenance, had identified a range of repairs needed to ensure the pipeline continued to meet production demands.

The fibreglass liner was first coated in resin. It was then forced into the old pipe using pressurised water. The water was then heated to near boiling point to cure the resin, creating a repair that will last more than 20 years.

The whole network was then resurveyed and a comprehensive report submitted to CoRD.

The project team liaised closely with residents and organisations in Rothes during work, which required traffic management measures to be put in place.

Jon Close said: “Our specialist no-dig pipe repair technology had a double benefit, in that it ensured the repairs were carried out in a timely and cost-effective way, and minimised disruption for local people. Conventional repairs, by excavation, would have taken several months rather than two weeks.”

A team from the Lanes Reline Division, in Manchester, working with colleagues in Aberdeen, carried out the comprehensive repair programme.

Lanes Group is a specialist drainage and maintenance solutions provider, with depots in Aberdeen, Glasgow, Edinburgh, and across the rest of the UK.