Blog - Latest News
You are here: Home / Facilities Management / Consensus statement of a Panel of Experts finds towels the most hygienic... 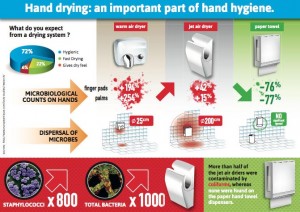 Brussels (Belgium), 18 November 2013 – Leading European microbiologists and hospital hygienists* have produced a consensus statement  recognising evidence that hand drying using towels is associated with lower numbers of microbes on the hands and in the washroom environment than using warm air dryers or high velocity air dryers.  The consensus statement provides sound advice for all those working in hospitals and clinical environments responsible for upholding the highest standards of hygiene.

The six experts, working in hospitals and universities in Belgium, Germany, Italy, Sweden and the UK have endorsed an eight-point consensus statement – Hand drying: an important part of hand hygiene.  It highlights the importance of hand drying, following thorough hand washing and notes that high velocity air dryers blow water containing microbes off the hands which can contaminate others in the washroom environment.

“From the results we have examined, it appears that there may be a greater risk of exposure to microbes associated with some types of hand driers. There was an increased level of microbial contamination on and beneath air driers, particularly jet air driers. These findings have implications for the prevention of spread of microbes and infections, that should be explored further by the medical community and beyond”, says Marc Van Ranst, professor in virology and chairman of the Department of Microbiology and Immunology at the University of Leuven in Belgium.

The six scientists endorsing the consensus statement examined a wide selection of scientific literature and also the studies sponsored by the European Tissue Symposium  in particular those undertaken by Eurofins-Inlab in Germany and the University of Westminster in the UK.**

Hand hygiene is recognised as the most important standard measure to prevent cross contamination or transmission of nosocomial hospital acquired infections.  The World Health Organisation (WHO) recommends the use of   single use towels in its poster on hand washing. The  consensus statement will hopefully prompt further research and steer policy guidance not only in healthcare settings, but also in other workplaces and in the washrooms of high-traffic public venues such as sports stadia, schools and airports.

“Tissue paper absorbs water and microorganisms,” said Roberto Berardi, chairman of the European Tissue Symposium. “It is crucial that hospitals and all healthcare facilitates adopt a method of hand drying that minimises the risk of re-contaminating the hands and blowing microbes onto yourself, others or surfaces around you. This consensus statement of European scientists is an important step in supporting our efforts to promote single use towels as the most hygienic hand-drying solution in clinical settings and beyond.”