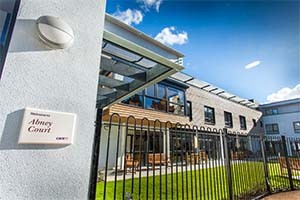 Spectus Approved Window Contractor Jade Windows earned the praise of a major care home group for returning to finish a 200-window installation despite the main contractor going into administration near to the end of the work.

The Yorkshire-based fabricator went back to rescue the project, working directly for the Care UK group, to finish the last few items. This enabled the new-build Abney Court care home in Cheadle to be completed allowing care home residents to move in as planned, on time. Jade lost out financially, but the gratitude of the client should bode well for future projects as a spokesperson for Care Group UK explained:

“Nothing was too much trouble for Jade. We were very pleased with their windows and installation right from the beginning but when the problem with the main contractor arose, they were back on site and carried out all the last bits and the snagging just as we would have expected had there been no problem. They were as helpful as we could have wished for and, thanks to them, we were able to open the home on time for the benefit of the residents who would have otherwise felt so left down and disrupted.”

The anthracite on white casement windows in the Spectus Elite 70mm bevelled PVC-U system were as specified by the client but, as Jade’s Ryan Fozard said, they were able to advise on the use of special restrictors as well as the design of the oriel bays. He added that they also helped to cut costs for the client by advising on more extensive use of the PVC-U system:

“Originally, quite a few of the windows were going to be aluminium, and much more expensive of course. We had a meeting with the main contractor and were able to offer a huge cost saving by turning to PVC-U for many of them. The result was no compromise on quality, just a much more cost-effective solution.”

He added that the anthracite on white Elite is now a stock item from Spectus, because of its growing popularity, which also made the project much easier to manage.

“But also we had the support of the Spectus commercial and technical teams at every stage of the project. However experienced or professional a contractor may be, there is always a time when a little additional support may go a long way and may even in some cases be the make or break of a contract.”